A downloadable game for Windows and Linux

SNAFU is like a familiar book that can still surprise you when you read it again. Only with more swearing. Jump into an interactive novel from the perspective of any one of eleven main characters, in a story that changes every time you read it.

SNAFU is a multi-perspective, choice-based, combinatorial-narrative, interactive-novel in which you, the reader, can experience the narrative from the perspective of any of the eleven main characters. No unlockable routes, just pick a character and start reading.

In SNAFU, all of the characters are reading/playing the narrative simultaneously, and the choices that they make will affect the flow of the story as much the decisions you make for your chosen character do, yielding many thousands of unique narratives.

Read it a dozen times, and you will likely not see the same story unfold.

The portion of the story covered by the demo is mostly introductory in nature (the prologue and the first chapter). The longest narratives will take you about 90-120 minutes to complete, at present.

While there are certainly choices to be made during this part of the story, there aren't a whole lot of them compared to the rest of the story. Nevertheless, the choices are spread across multiple characters, and that means a lot of narrative variations (993 combinations of choices, yielding around 1,700 variant narratives). More, now that the whole first chapter is included.

However, you don't see how it changes on your first play-through. Until your second play-through, you have no base-line to compare with, so you cannot really see how the narratives and stories change based on the choices made by yourself and the other characters.

Music and artwork is far, far from final. Most of it exists as placeholders, at present. Please do not distribute the demo, as not all of the assets are properly licensed, at this time.

The year is 1461. The War between the Westrish Empire and its former colony (now the Free Republic of Fracia) is almost seventy years in the past.

Fracia fought for the equality of its citizens, and ultimately achieved that goal, but the War was not so long ago that tension between these two powers has been completely erased.

It is an exciting time in the world, with new scientific and technological advances appearing all the time, even the very first wireless telegraphy sets!

A small, unassuming island in the Cerulean Sea becomes the subject of a strategic fuck-up that could been have avoided, but wasn't.

Eight soldiers, a handful of travellers, and an indigenous island population will be caught up in events beyond their control, and have to make the best of a very awkward situation.

These alpha builds do collect and send some information in the way of telemetry. This includes length of play, choices made, and interaction with certain interface-elements. This telemetry data is used for tuning and improvements to the game and story, and is not at any time intended to infringe on your privacy, and an effort is made to not collect or transmit information which might otherwise breach your privacy in any way.

tl;dr: I don't want or access your private info, files or anything else. I just gather a little data about actual gameplay, so I can make things better.

This game is currently unavailable 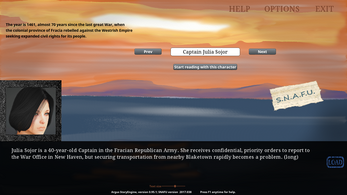 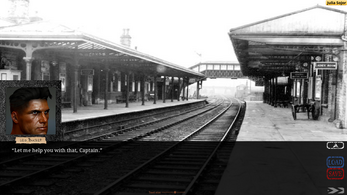 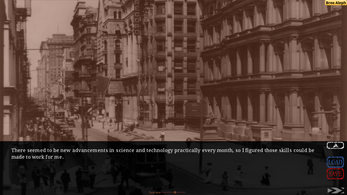